We utilize CrossFit with a strong emphasis on strength as our primary training method. Our program is distinctive, if not unique, in its focus on maximizing neuroendocrine response, developing power, cross-training with multiple training modalities, constant training and practice with functional movements, and the development of successful diet strategies. We encourage and assist our athletes to explore a variety of sports as a vehicle to express and apply their fitness. The atmosphere is one of support and camaraderie to anyone willing to put in the work. Dave is a co-owner and trainer at CrossFit Worcester. He is member of the Worcester Police Department and serves on the department’s Mounted Unit. Dave has been involved with CrossFit since 2009 and has been training athletes at CFW since the facility opened its doors in 2012. Dave is a CrossFit Level 2 coach, is currently preparing for the CrossFit Level 3 exam.

Dave has always been physically active and has a passion for sports. The demands of police work require a high level of physical fitness and he remains a thrill seeker. Dave has completed numerous obstacle course races and is a veteran of the GORUCK challenge, Spartan Race and Tough Mudder. Paul is a co-owner and trainer at CrossFit Worcester. He is fourteen-year veteran police officer with the Worcester Police Department, an active member of S.W.A.T. and a 20-year veteran of the U.S. Air Force. Paul is a CrossFit Level 2 coach, is currently preparing for the CrossFit Level 3 exam and serves as the gym’s subject matter expert on nutrition.

Paul played numerous sports throughout his academic career and is a veteran of the Tough Mudder, the GORUCK Challenge and numerous road and obstacle course races. While he still enjoys these sorts of physical endeavors, Paul is living his dream by helping people meet (and exceed) their personal fitness and wellness goals. He became a certified nutritionist in 2014, has lectured throughout the state as s subject matter expert and has helped countless people improve their quality of life through nutritional education. Scott is a co-owner and trainer at CrossFit Worcester. He has been involved with CrossFit since 2010 and has been training athletes at CFW since the facility opened its doors in 2012. Scott is a CrossFit Level 2 coach, is currently preparing for the CrossFit Level 3 exam and serves as the gym’s programming director.

Scott played baseball at the collegiate level and is a veteran of the Tough Mudder, the GORUCK Challenge and numerous road and obstacle course races (including multiple half marathons). While he still enjoys these sorts of physical endeavors, Scott is now driven more by training CFW’s athletes and helping them accomplish things they never thought possible. Amy Sciannameo started CrossFit in 2009, became a CrossFit Worcester founding member in 2012 and has been training athletes there since 2015.

With a love for running, Amy embraced CrossFit as her method of cross training and was immediately hooked. Since 2012, she has completed 12 marathons, over 25 half marathons, two GORUCK Challenges and numerous obstacle course races, including Tough Mudders, Spartan Races and Tough Ruck. While she still enjoys running, Amy is now focusing more on Crossfit and most importantly, her development as a CrossFit trainer by assisting athletes of all abilities in finding enjoyment outside their comfort zones.

“The community within Crossfit, especially Crossfit Worcester, is one that is as challenging as it is welcoming. As a trainer, I can think of nothing more rewarding than the look on someone’s face when they have done that which they have said they can not do. “ Jon Sewell has been a member at Crossfit Worcester since it first opened, and a trainer since late 2016. He works primarily with On-Ramp classes to ensure that new members are eased into the culture and physicality of training at CFW.

Jon has dabbled in just about every kind of fitness training out there. He’s copied down arm day routines from Muscle and Fitness and Flex magazines, done the whole GOMAD thing from Starting Strength, trained for 10K runs, studied numerous martial arts and competed in boxing, thrown around atlas stones and cabers in strongman sessions, and lugged around backpacks of bricks in early GORUCK events. He continues to return to CrossFit – the one training methodology that allows him to continue dabbling in various strength and training disciplines.

“Crossfit Worcester is such a special place. The training will absolutely begin preparing you for whatever challenges you may encounter in not only athletic pursuits, but in your day to day life. The physical preparedness is great, but the mental toughness and self-confidence that we see our members develop is what I enjoy the most. You’ll also meet, sweat with and befriend absolutely amazing people from nearly every walk of life, broadening not only your physical capabilities, but your perspective as well.” Allie joined the CrossFit Worcester coaching team in 2014 after spending two years as a CFW member and collegiate athlete. Allie is a CrossFit Level 1 and Level 2 coach as well as an ACE certified Group Fitness instructor.

Allie used her CFW training to improve as a collegiate athlete and believes that the CFW program and commitment to functional movement is ideal for individuals of all ages and abilities. She loves helping members build confidence and feeds off the energy of group classes. “CrossFit Worcester is really unlike any other fitness establishment or training regimen. I’ve seen and experienced how CrossFit Worcester has changed and even saved lives. I’ve grown stronger physically and mentally because of the amazing resources available, supportive community and consistent commitment to the CFW programming. CrossFit Worcester is my happy place, my escape and my home all in one.” Craig started doing CrossFit 10 years ago and has been a member of CrossFit Worcester since its opened.

Craig became addicted to CrossFit from the second he tried it. I firmly believe that CrossFit combines the two most important things for a healthy body and mind; exercise and socialization. The community at CFW is second to none, as witnessed by it winning best CrossFit gym 3 years in a row. I’ve enjoyed my transformation from “athlete” to “coach” because I truly believe that for whatever troubles you, CrossFit is the cure.

Liz started CrossFit in 2013 and was immediately hooked on the excitement and community. She found herself at CrossFit Worcester in 2017, joining the coaching team in 2018.

Growing up a competitive gymnast, Liz always had a passion for being active and feeling strong and she loved that CrossFit brought that passion back into her life. She loves the thrill of competing with others, but finds the most motivation in competing against herself. Since becoming a trainer, she has enjoyed sharing these passions with others and watching athletes of all ages and abilities fall in love with feeling and becoming stronger every day. Learning even more about the ins and outs of programming and nutrition, Liz loves that these movements can be adapted for athletes of any ability and believes this lifestyle is the key to living a longer, happier life. Joe joined Crossfit Worcester in November 2012 at the age of 51. In November 2017 he completed his Crossfit Level 1 Certification and began coaching immediately starting with the on-ramp program and afternoon classes.

His athletic career began as a youth and high school hockey player. In his 20’s and 30’s he focused primarily on running, biking and swimming while competing in numerous marathons and triathlons including several Boston Marathons and the Ironman Triathlon. Distracted in his 40’s he let himself go physically and at the age of 51 arrived at the doors of CFW curious and hopeful.

What I found at CFW was a new mindset; which in turn created a new body. Primarily having an endurance mentality my body couldn’t do what it did when I was younger. How wrong I was. The appeal to me about crossfit was the daily dose of fitness. Not all daytraining; but short intense focused workouts. Each class offered a chance to improve, to go beyond what I previously did. Slowly I became an athlete again.

I use to identify with the words “the loneliness of the long distance runner”. Today I enjoy the camaraderie and joy of the crossfit community and the end of fitness isolation as we celebrate each other’s fitness and nutrition goals and successes. Now I identify with “TOGETHER WE CAN”. That’s why I became a coach. We are all in this together; sharing our experience, strength and hope. Laura Nickerson (Nowell) joined the CrossFit Worcester coaching team in 2018 after spending three years as a CFW athlete. Laura has a passion for CrossFit and coaching athletes and uses her flexible work from home schedule to work with CFW members in the early mornings, afternoon and night. 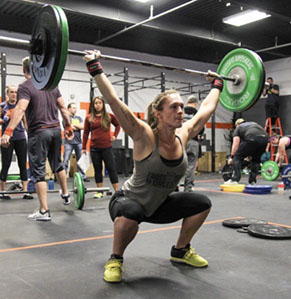 Erica Gagliastre has been an active member of CrossFit Worcester since 2015. Erica made the decision to become a coach in early 2019 and started coaching at CFW. Barbell movements were an instant favorite.

Erica has partaken in Olympic Lifting trainings, including a seminar with Fred Callori, of Beantown Barbell. Erica loves working with new and longtime members of CFW. She is passionate and has an active style of coaching. Erica currently holds her CF L-1 and cannot wait to pursue her CF L-2 in the future.

“CrossFit is great for physical health, but what CrossFit can do for you and your mental capacity is indescribable”.

Join us for a Free Class to get to know our coaches, community, programming, and discover how we can help you!